Manufacturing your own ammunition (shot shell, rifle and/or handgun) is an interesting hobby (and sometimes passion) for an interesting breed of folks. Back when I was competing with my department with the S&W 686 revolver, I wasn’t satisfied with the .38 special ‘wadcutter’ ammunition that I was competing with. As with my shooting, there was always room for improvement. Pretty soon, I had acquired a progressive re-loading press and everything that I needed for ‘rollin’ my own’ version of this favorite competition cartridge. Of course, that led me to producing my own .357 magnum, .45 ACP, and .44 magnum loads.  Unfortunately, I had to sell the reloading equipment during some hard times and never found myself traveling down that road again. That’s sad, as I had really enjoyed spending numerous hours in the quiet of my garage reloading.  Although I have been tempted to start reloading again for personal pleasure, I have not succumbed to the temptation. 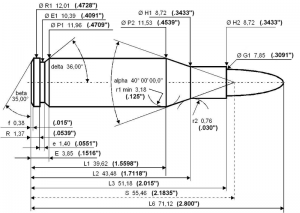 I never did ventured into re-loading for rifle calibers. However, I have a close friend, whom I will call Mike (because that is his name) that loves to experiment with rifle-caliber loadings. He is also an excellent shot and I have personally witnessed his cutting a playing card in half with a .308 caliber projectile on three separate occasions. With his latest recipe, he  offered to share with me the pleasure of shooting a custom cartridge through my Ruger Scout in .308, which I gladly accepted and this article is a result of my findings and impression of the cartridge.

While most chefs hide their secret ingredients, Mike is sharing the full recipe with me, and which he asked me to share with you for evaluation and conversation. So, let’s get started with the recipe. 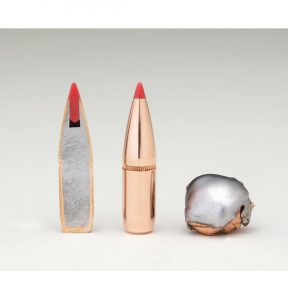 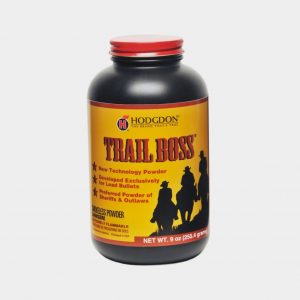 “I use a 180-grain. Hornady SST for the projectile. My normal projectile for a regular .308 load is the Hornady 150g. FMJBT.  As near as I could measure, the bearing surface on the 150-grain bullet is .255” and the 180 grain bullet is .426”.  I think this extra bearing length adds stability and accuracy to the projectile as it’s going down range at a much slower velocity.

The powder is Hodgdon Trail Boss. This powder is mainly used for cowboy loads and is really designed for lead bullets, but also works in a few rifle cartridges. It looks like tiny cheerios compared to regular ball or spherical powder as Hodgdon likes to call it.

The advantage to Trail Boss is that it takes up almost 3 times the space inside the case. For example, 10-grains of Trail Boss will take up as much space as 30-grains of H335. This insures ignition from the back of the case to the front of the case because the powder is against the primer. Also to aid in the ignition of the powder, the primer flash holes are drilled out to 9/64-inch to ensure positive ignition. With this drill dimension, the primer seats securely and primer set back is a non issue due to the low chamber pressure. I use standard CCI #200 Large Rifle Primers.  Another ingredient is the use of Crisco on the bearing surface of the bullet for lurication against the case.”

So the load is: 180g. Hornady SST bullet over 10-grains of Hodgdon Trail Boss, and a CCI #200 Large Rifle primer with the flash hole in the case drilled out to 9/64-inch.

Seating depth is to the center of the cannelure. Overall cartridge length is 2.756 inches. Estimated velocity is around 1,050fps.

Now, you may ask why we are experimenting with the 180-grain. Hornady SST, a hunting projectile, when the Hornady 150-grain FMJBT is a target projectile. Well, and to answer your question, the 180-grain. Hornady SST was on sale. That was simple enough.  And, where is it written that a bullet intended for hunting cannot be used as a target bullet? Actually, there are plans to evaluate the Hornady 150-grain FMJBT at a later time.

The cases used in this experiment were random cases that were properly prepared. Some folks (purists) might question the use of pre-fired cases rather than using new cases and removing one of the baselines from which to measure.  Loading your own is about experimentation, right? 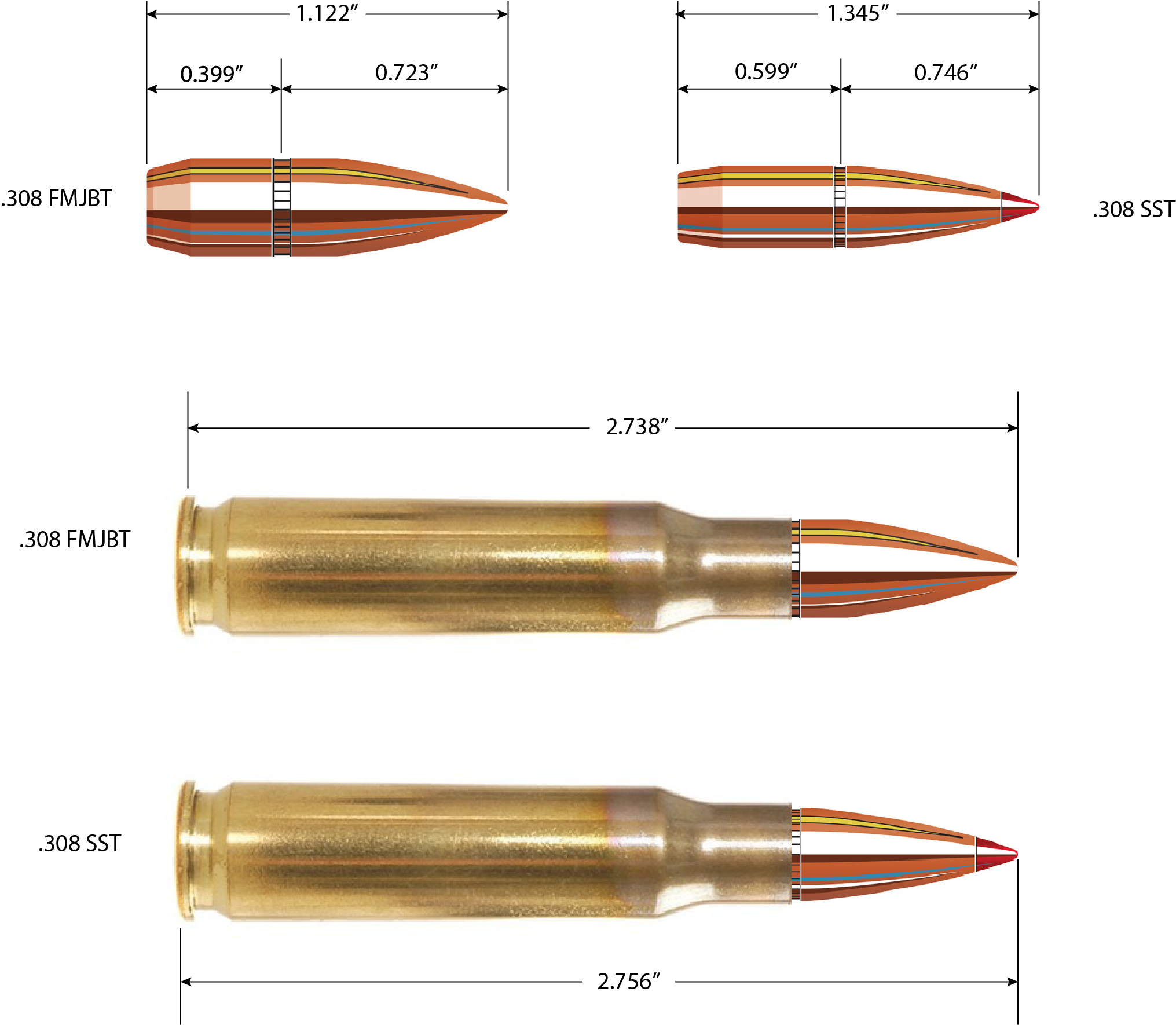 The object of the test was to evaluate both accuracy and precision of the down-loaded 180-grain cartridge at twenty-five yards bench-rested. Note that there is no re-loading data for this powder (Hodgdon Trail Boss) for a bullet weight of 180-grains. For a 150-grain bullet out of a 24” barrel; however, an estimated 1,176fps is given with 10-grains of powder used.  Mike’s EWAG (Educated Wild-Assed Guess) of 1,050fps may not be far off, but we would check that with a LabRadar chronograph from which velocity measurements are based on Continuous Wave Doppler Radar and advanced Digital Signal Processing Technologies. The LabRadar unit was provided by my Son-In-Law. It should be noted that the LabRadar minimum distance is 50 feet. We were shooting at 25 yards (75 feet) so we might be pushing the lower limit of use with this unit.

When shooting at twenty-five yards in an indoor range, environmental factors do not factor in (no pun intended) as much as they would shooting at an outdoor range at longer distances. We, who shoot at this facility, have a few running jokes about air-conditioning cross-wind effecting our shots as does choosing what side of the range to shoot on and what lane to shoot in.  It is all in light-hearted and good-natured fun, of course.  But, for those who are really interested in such things; the range is about 1,040 feet above sea level, the building temperature was warm and the relative humidity was humid.  The wind from the air ducts was a tailwind since the heating/cooling ducks are behind the shooters. Coupled with the hot air generated from shooter banter, I figured that I did not have to worry about doping the scope to compensate for air gusts.

In addition accuracy and precision determinations, the amount of felt recoil would be evaluated as compared to other loading such as Winchester 150-grain Razor Back XT (2810 fps), and a few of Mike’s a hand-loaded .308 cartridges with a Hornady 165-grain SST bullet loaded over 35-grains of Hodgdon H335 powder that is well below the 39-grain starting load (the starting load is an estimated 2450fps from a 24” barrel). When you are trying to split playing cards at twenty-five yards, there is no need for a ‘higher power’ than what is needed to do so.

A 100-yard sight-in target was posted at twenty-five yards distant and I was going to use the first five rounds to check and adjust for zero, since the last time that I zeroed the Ruger was for a 100-yard zero. We also figured that five rounds fired would provide us with some preliminary feet/second data from the chronograph.  We would record each shot, throw out the highest and lowest recorded, and then determine an average velocity from the remaining data.

Once the Ruger Gunsite Scout was zeroed as close as I could get zero, we set to work.  The chronograph was giving us some issues, but we were finally able to get some velocities recorded. The average velocity was 1056.5fps, which was exceedingly close to Mile’s EWAG of 1,050 fps. 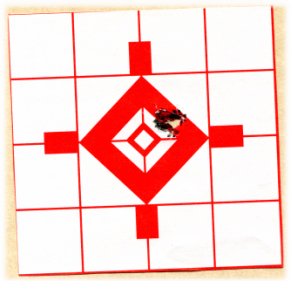 Figure 6. Mike’s impressive sub-quarter inch, 5-shot group, which was about the size of my best group.

While I took my turn with the rifle, I was not going to let Mike get by not shooting his own home-brewed cartridges and he took the rifle reins.  He turned in a very impressive group, as you can see. Don’ you just hate it when somebody else shoots your firearms better than you do?

I could shoot the cartridges under test all day long. For comparison, I also shot a few rounds of Winchester 150-grain Razor Back XT (2810 fps) and a few hand-loaded .308 cartridges with a Hornady 165-grain SST bullet loaded over 35-grains of Hodgdon H335 powder. To say the least, the Winchester 150-grain Razor Back XT (2810 fps) reminded me what it feels like to fire full-loaded ammunition.

Just for giggles, below is the estimated ballistics for this custom-loaded cartridge. The fps was rounded off to 1,050. 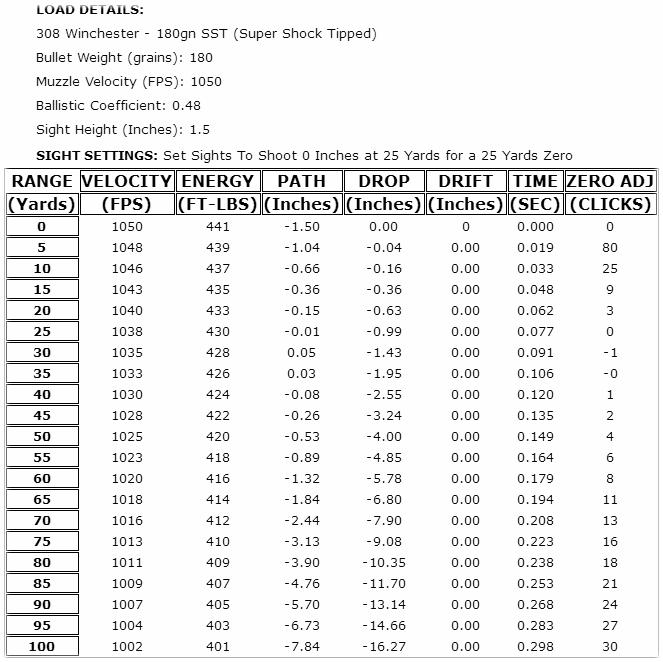 We took a lot of knowledge home with us. This cartridge combination is an excellent round for practice, plinking, and for shooting small game at a short distance without taking yourself to a chiropractor for a shoulder adjustment. Felt recoil was less than what I experience with most 7.62x39mm cartridges through the lightweight Ruger Ranch rifle.  For comparison, the factory-loaded version of this round, the Hornady Superformance, .30-06 Springfield, SST, 180 Grain cartridge has a Muzzle Velocity: 2,820 FPS and Muzzle Energy: 3,178 ft.-lbs. Obviously, we were running this bullet far below its purpose as a full-blown hunting bullet, but it sure was fun and a good time was had by all.

The second lesson that I took away from all of this is that the AIM 2-7×32 LER scope is too small for my eyes, but I will say that it worked well for Mike.  I’ll be upgrading the scope very soon.

The Ruger Gunsite Scout, the cartridge, and Mike’s shooting expertise proved that the combination worked well. Purchasing the Hornady 180-grain SST bullets on sale and being able to roll-your-own to your desired performance level only sweetens the pot.