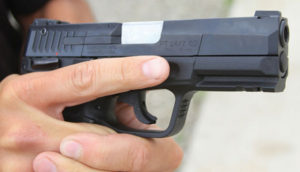 When we return the pistol to the holster, the trigger finger is once again resting alongside the frame to prevent an inadvertent insertion into the trigger guard. If we are wearing an outer garment, that outer garment has to be cleared prior to inserting the pistol into the holster. In some cases, as with open carry (law-enforcement or otherwise), there may be a thumb break strap that has to be cleared prior to holstering the firearm. There is the distinct possibility that outer clothing, or possibly the thumb break strap, could find its way into the trigger guard. With “Safe Action” pistols, there is a possibility of clothing or thumb break strap hitting against the trigger in a fashion that could cause an Unintentional Discharge (UD) of the pistol. The possibility even exists in pistols that incorporate an active thumb safety and or passive grip safety if these safeties have not been set to their “safe” positions. 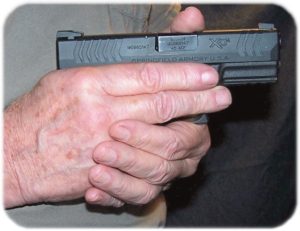 When the military began teaching soldiers how to shoot the 1911 pistol, shooting was done with the middle finger; the trigger finger was positioned alongside of the frame. Shooting with the middle finger was soon abandoned by the military when it was found that the soldiers were pressing the trigger finger against the disassembly pin, which would move it, subsequently moving the entire disassembly assembly outward from the frame during firing. If the disassembly pin was pushed far enough during the pistol’s cycling, the pistol could jam. (I have had this happen on a 1911-based pistol with a disassembly pin that would walk out of the frame without my assistance while the pistol was being fired. I guarantee that the pistol will eventually jam.) 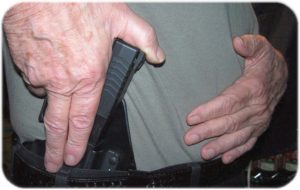 Inserting Into the Holster. Two Fingers Cover Trigger Guard As Holster Is Inserted 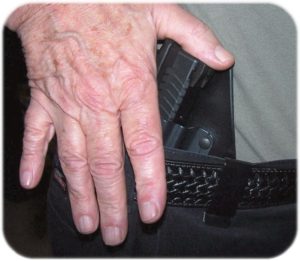 Picking up where I finished digressing, and with the trigger and middle finger now alongside the pistol, the holstering process begins. If the pistol has an external thumb safety, the safety has been placed in the “safe” position prior to moving the pistol downward for holstering. If the pistol has a passive grip safety, the hand is relaxed slightly to release the pressure on the grip safety. As the pistol is inserted into the holster, both fingers feel the lip of the holster and flair slightly outward. This action assists in removing any clothing away from the trigger guard. As the trigger guard clears the lip of the holster, the thumb is used to simply guide the pistol the rest of the way into the holster by simply pushing against the rear of the slide (in the case of the 1911, the thumb can simply push against the top of the grip safety and the rear sight).

Let it be noted that the pistol can be fired from the high-ready position if need be – one handed or two handed – with the trigger finger or the middle finger. The pistol can also be drawn from the holster using the “Two Finger” method with practice.

As with any technique that is new to you, practice the technique with an unloaded and safe firearm until it becomes natural to you. I have found that when using the “Two Finger” holstering technique I feel a little safer when holstering a pistol, regardless of the number of safeties included in its design.