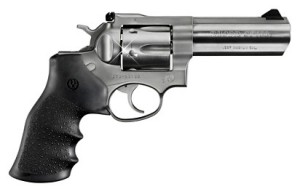 The Ruger GP100 was introduced in 1985 to replace the Security-Six/Service-Six/Speed-Six revolvers. The Ruger GP100 was also a call to compete with the Smith & Wesson 586/686 revolver that was adopted by many law enforcement agencies and handgun shooters of the time.

My involvement with Ruger firearms had been limited to a .44 magnum, semi-automatic carbine (the Ruger Model 44). I had never dabbled in the handguns of Ruger, but that changed in 1990 when my wife at the time purchased a 7.5-inch barreled Ruger Redhawk for me as a Christmas gift. While I had shot the Ruger Super Blackhawk on a previous occasion, the Ruger Redhawk was about as perfect a gift as I could ever ask for. The Ruger Redhawk; however, is not a revolver you take to the range just to enjoy shooting. Regardless of the weight of the Ruger Redhawk, full-load .44 magnums do make for a short range day. Since I had a Smith & Wesson 4-inch barreled 686, having a second .357 magnum revolver did not really interest me. My appreciation for the Ruger Redhawk finally led me to purchase a blued, 4-inch Ruger GP100 that I eventually sold to finance a stainless steel 4-inch barreled version of the GP 100, or as it was listed at the time, the KGP-141. 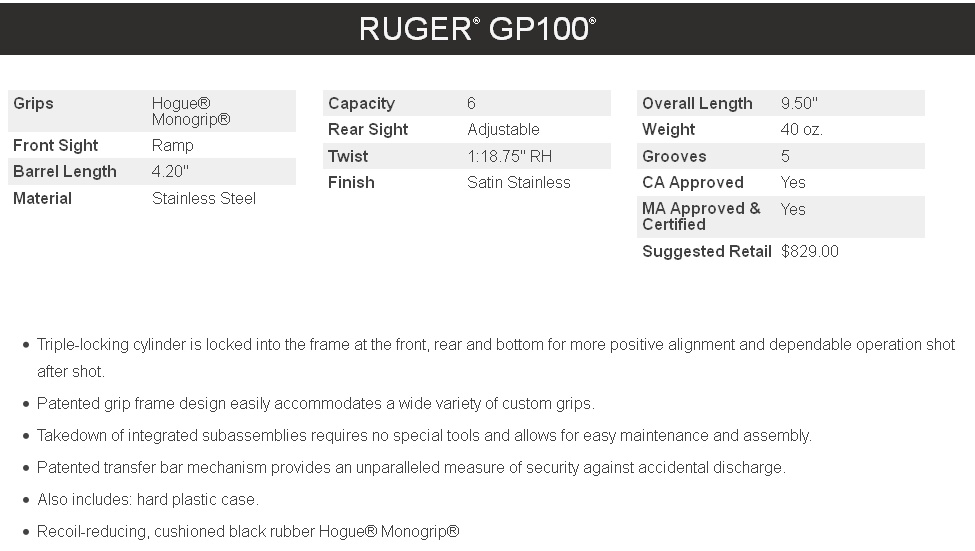 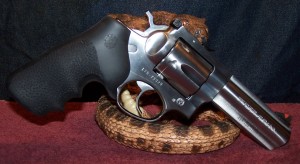 The Ruger GP100 incorporates the robust features of the Ruger Redhawk in its design and can handle just about any .357 magnum load that you want to send down range. The GP100 shared the crane lock from the Redhawk that was later used in the small frame SP101 revolver. All of these models use the same thickness on the solid frame and double latching system as used on the heavy .44 Magnum. Because of these features, the GP100 series is widely described as one of the strongest medium frame revolvers ever made. 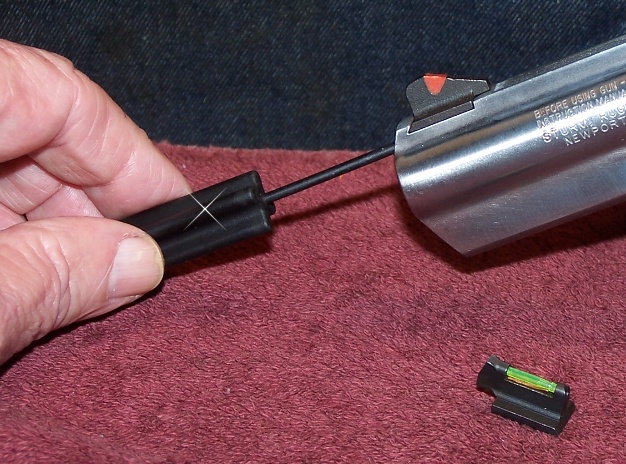 Use the Glock Tool to Replace Front Sights

The GP100 came equipped with a blade front sight with no insert when I purchased it. I found that I could use the front sight from the Ruger Redhawk, which has a red insert, and it soon replaced the standard front sight, but that has been changed since with a green fiber optic sight. Changing the front sight on the GP100 is a simple affair. There is a plunger at the muzzle end of the revolver, which when pressed (A Glock tool is perfect), allows the front sight to be removed and replaced with the same front sight or a front sight of your choice. This is a feature that allows you to play with different front sight combinations. 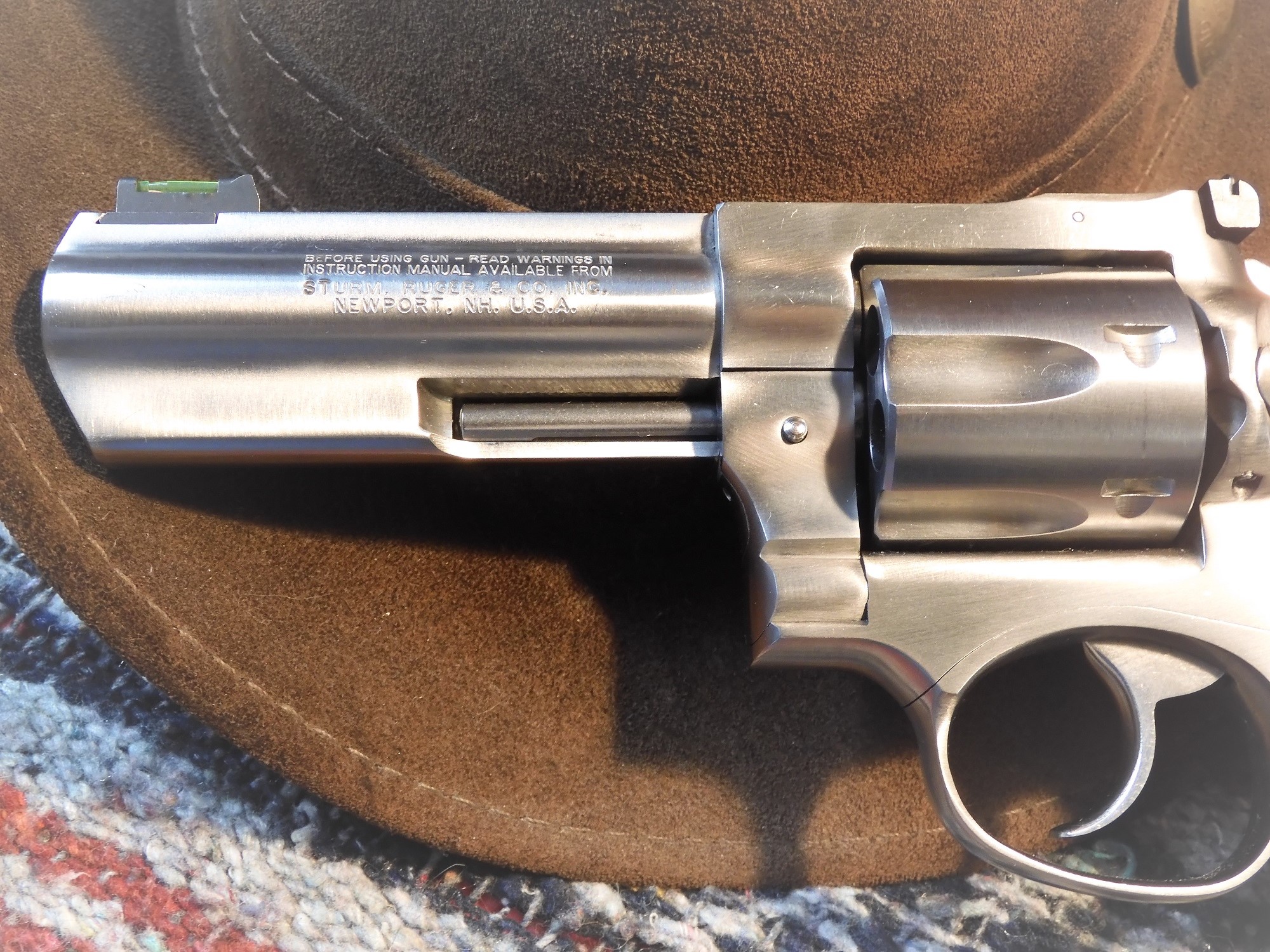 The white-outline notched rear sight is adjustable for windage and elevation. The rear sight is blended well into the frame of the revolver.

The double-action trigger pulls slightly heavy but is also very smooth. Like the Smith & Wesson 686, the hammer can be “staged” very easily so that just a wisp of rearward movement of the trigger drops the hammer at the staging point. I found this feature very useful when running the Smith & Wesson 686 in Police Bulls Eye matches since we could not shoot in single-action mode. Speaking of single-action mode, the trigger pull average on my GP100 is 3 pounds 14 1/2 ounces and is almost as crisp as a good 1911 trigger. When the hammer falls on this revolver, you definitely know it.

The trigger is smooth and wide while the hammer is somewhat narrow but is well-checkered for a good purchase with the thumb.

The GP100 does incorporate the Ruger Transfer Bar Safety that prevents the hammer from falling onto the firing pin unless the trigger is pulled.

The top of the barrel is serrated to help prevent glare from interfering with the sighting of the revolver.

THE WEIGHT OF IT ALL:

While some say that the GP100 is a heavy revolver one must consider how well that plays in taming the recoil of the .357 magnum cartridge. Aside from side and muzzle flash, it is not difficult to put rounds downrange and enjoy doing so. I would also like to put the weight of the GP100 into perspective. My current EDC is a Rock Island Armory 1911 FS Tactical that weighs 39.4 ounces (2.49 pounds) not loaded. By comparison, the GP100 weighs in at 40 ounces (2.5 pounds) not loaded. There is no negligible weight difference between the Ruger GP100 and a standard 1911 pistol and is nothing that a good pair of suspenders can not assist with.

Obviously, there is a difference in width between the 1911 and the GP100. With that said, I have carried the Ruger GP100 IWB in a well-made holster intended for such (Simply Rugged Sourdough Pancake [While this is an excellent IWB holster for carry, it is not re-holster friendly and lacks the rigidity needed to keep the holster open after the firearm is removed]) and OWB in a Bianchi #111 with Thumb Break (a holster that is excellent for strong-side and cross-draw positions). 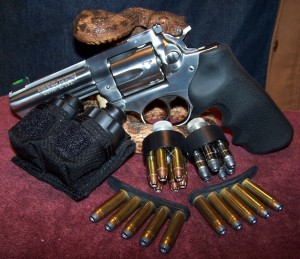 Firing a .38 special cartridge exhibits about the same felt recoil as firing a 9mm round.. Even .38 +P ammunition does little to bother the hand. The weight of the GP100 revolver helps greatly in taming the recoil of the .357 magnum cartridge. While 180-grain hunting loads are stout, the Ruger GP100 really shines with 125-grain loads. Hunting loads, like the 180-grain, are best reserved for the 6-inch barreled version of the GP100 (or the Ruger M77-357 bolt-action carbine).

The inherent accuracy of the GP100 is excellent; whereupon, true accuracy is mainly dependent on the skill of the operator in handling the magnum loading(s) and finding what loading work best with the firearm. My particular GP100 seems to favor Hornady Critical Defense 125-grain FTX and (surprisingly) Fiocchi 158-grain XTPHP. I also have some .357 magnum ammunition that is loaded on the conservative side that works well for range practice. Since my GP100 is relegated mainly to house duty, Remington 158-grain +P .38 special is chambered (I said that I do not like to shoot .38 special ammunition in a revolver intended for .357 magnum fodder, I did not say that I would not shoot them) while the Hornady Critical Defense 125-grain FTX resides in a couple of Safariland Speed Loaders (which I recommend over HKS) if they are needed to be called upon.

The distance between the face of the cylinder and forcing cone (also know as the “Flash Gap”) is less than 0.004-inch and that, my friend, is tight.

It is very important that grips do not interfere with expending fired brass and the Hogue Rubber Wraparound grip with finger grooves does a fine job of not interfering with the reloading process.

The GP 100 has not gone through any changes since I last updated the grip and front sight.  While I liked the Hogue Finger-groove grip, it made the grip a bit larger than what I liked, I did not feel as if I had full control over the revolver. The grip was too large, even for my liking. 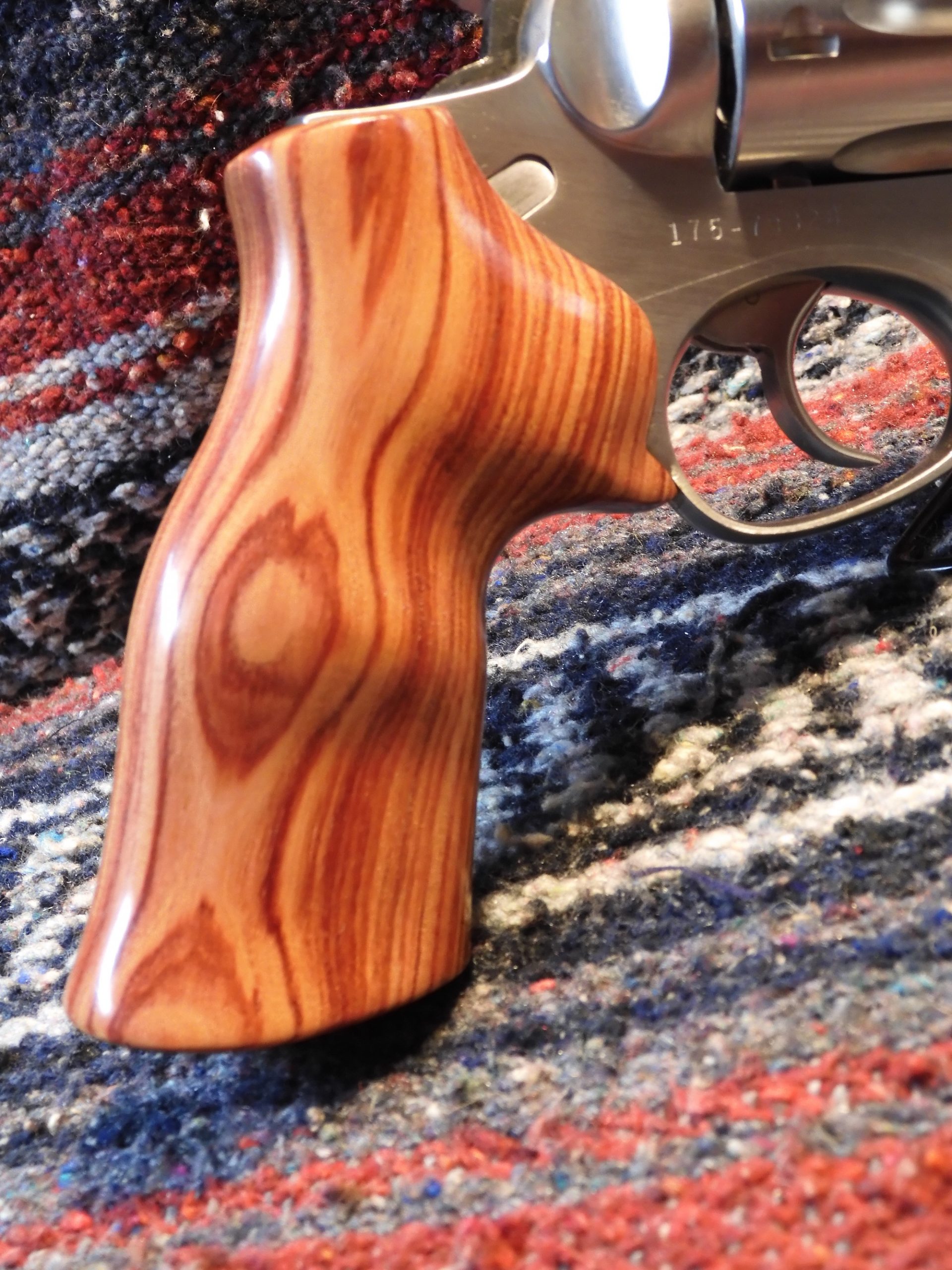 Prior Hogue Finger-groove in Tulipwood.

Previously, I had mounted the Hogue Exotic Wraparound Wood grip with finger grooves in Tulip wood. I really liked this grip, aside from the fact that it had no texturing and was really, really slippery. I decided against this grip and returned to the Hogue unit. I really needed a grip that my hand and eyes would like.

Recently I came across, while shopping for something else, the Hogue GP100/Super Redhawk Coco Bolo Checkered Gun Grips. I liked the finger-grooves, I liked the wood pattern, and I especially liked the side panel checkering. The grip was ordered and mounted within minutes (if not less). The difference between grips was highly evident.

The Hogue GP100/Super Redhawk Coco Bolo Checkered Gun Grips, when my hand wrapped around it, was oh-so-sweet! The checkering is mild enough to not aggravate the hand while still providing a very secure grip surface. The wood grain pattern, while different from the stock photo shown at Amazon, is much pronounced and darker in appearance (these are solid wood and not laminate). Also, the GP-100 does not feel as bulky as it did with the Hogue finger-groove grips. In fact, the GP-100 now feels more balanced in the hand. That is saying something, considering the weight and bulk of the GP-100. It feels close to, but not quite, the Smith and Wesson 686, which is one of my favorite revolvers of all time.

Below, see the results of the upgrade. 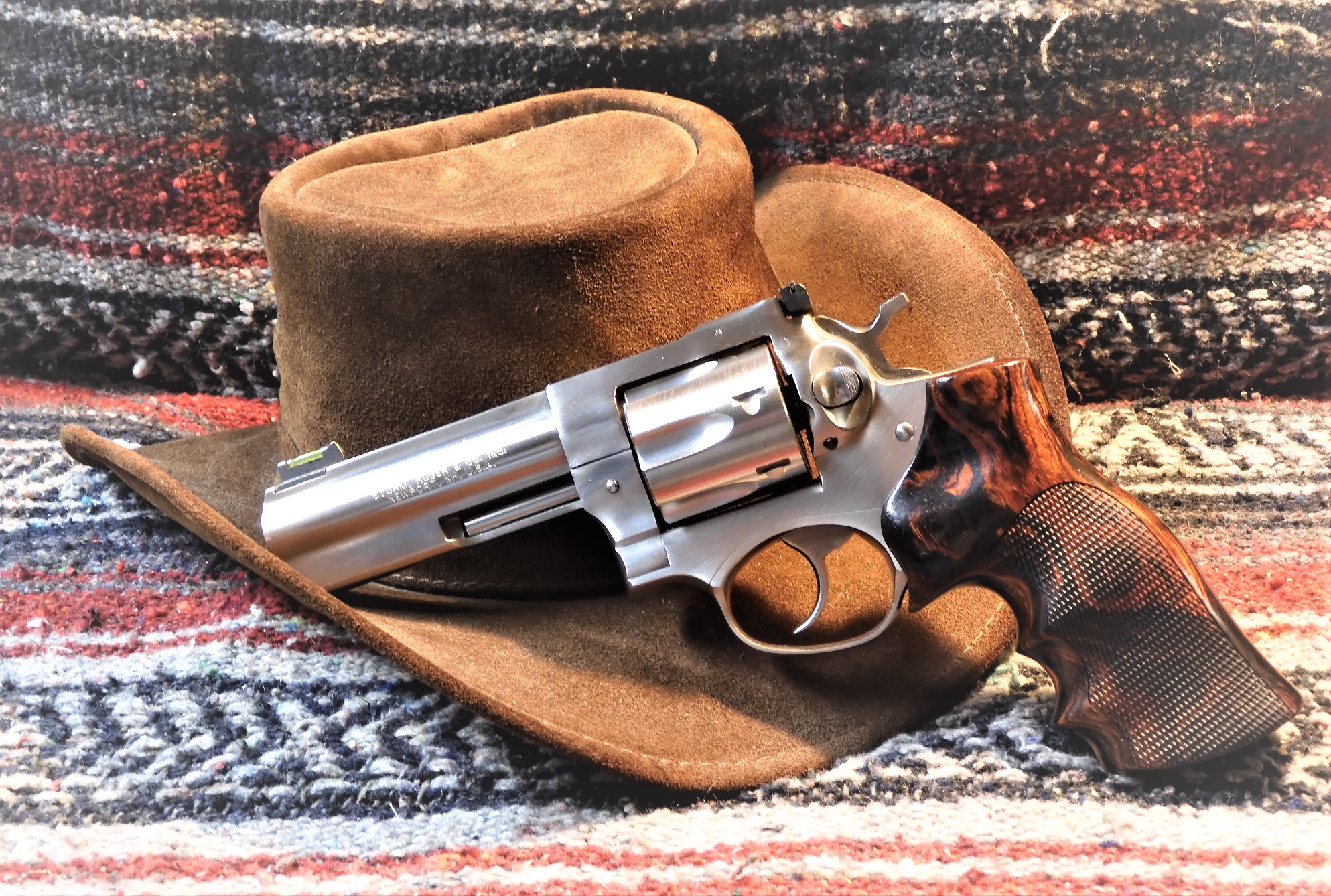 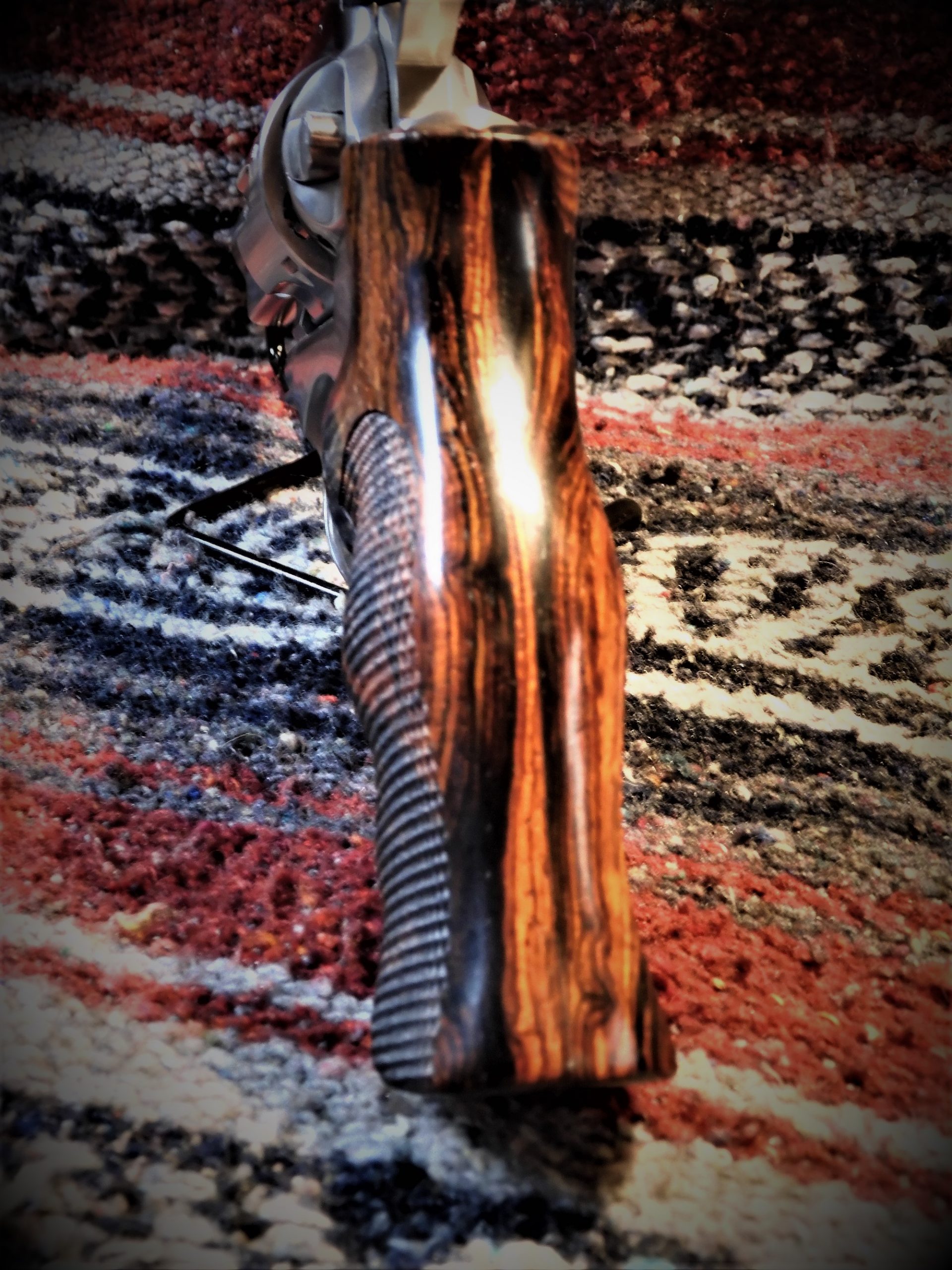 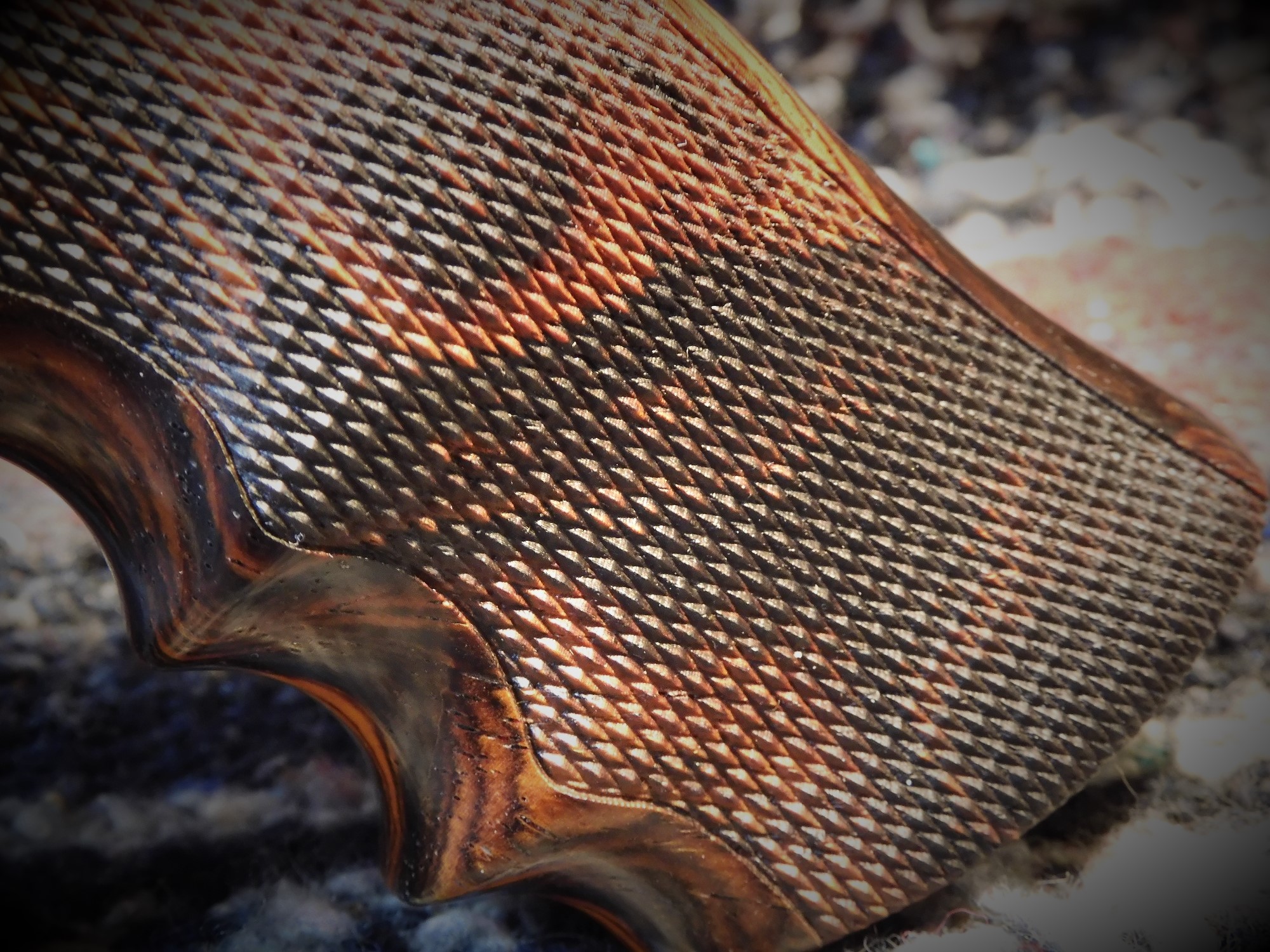 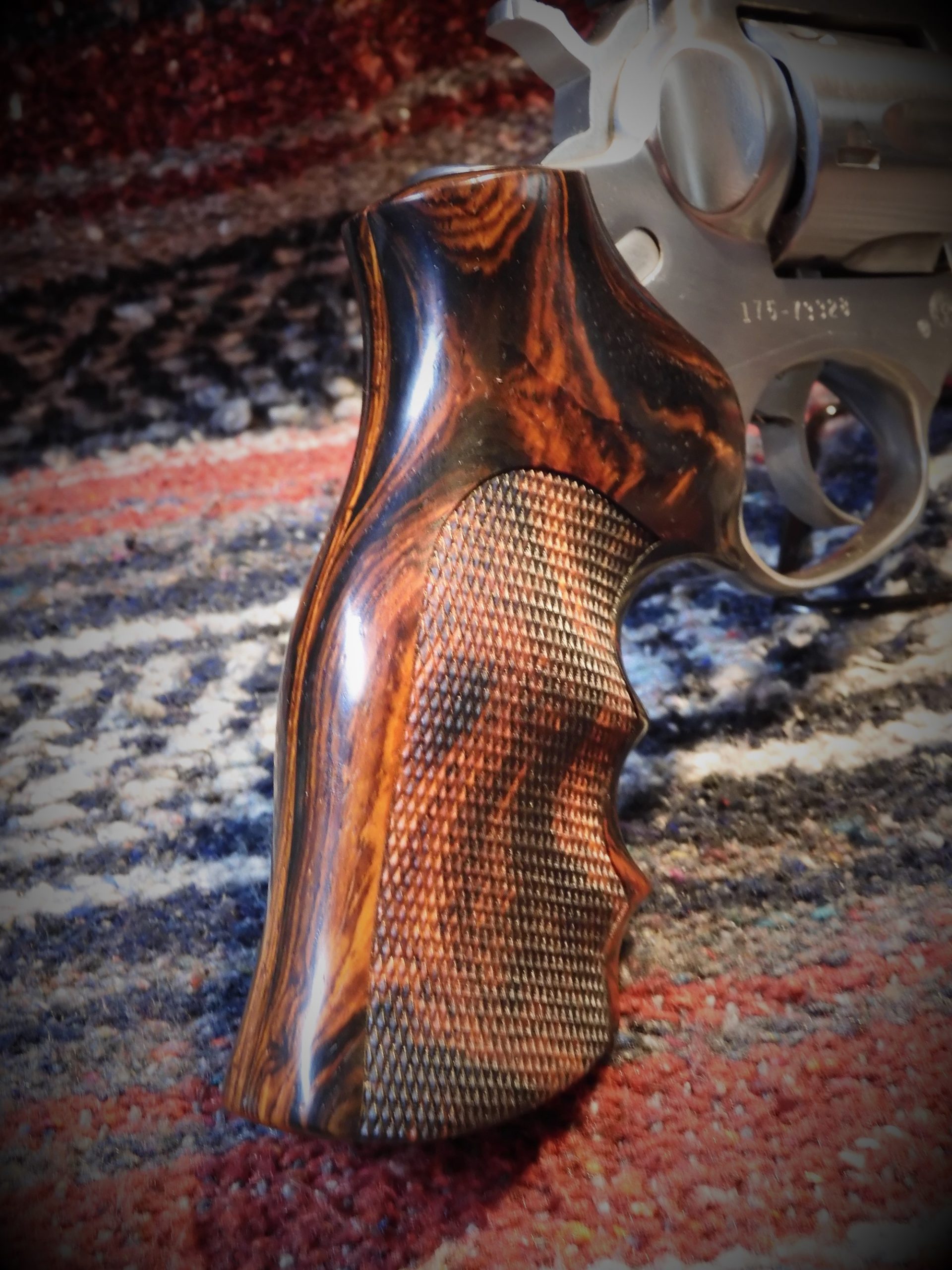 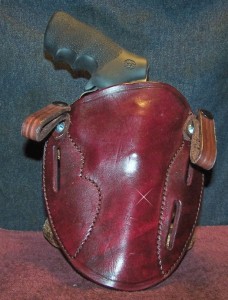 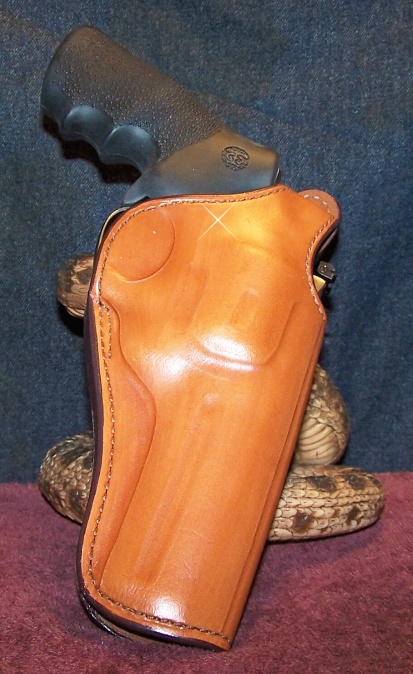 The shooting of the GP100 has since led me to purchase its younger brother the SP101 in 2.5-inch barrel flavoring, and is a revolver that I do carry at times. Obviously, the SP101 is a lot more relentless in the recoil department with .357 magnum ammunition, but is every bit the quality of firearm as the GP100.

While I really like S&W revolvers and my DW Model 15-2, because of their trigger smoothness, a Ruger (single-action or double-action) revolver would come out when I need to exercise magnum power with maximum control. With the Ruger M77/357, the GP100 is an excellent match. In fact, I just might consider the M77/44 to pair up with the Ruger Redhawk. Now, that would be an excellent match!

The GP100 comes in different barrel lengths and, while the GP100 is primarily chambered for .38 special/.357 magnum, a .22 LR caliber is also available. There are several variations available through distributors such as Gallery of Guns and TALO as well as the Ruger GP100 match Champion.

As a side note, and unlike my early model, later models of the GP100 come equipped with the Hogue Monogrip that many will find comfortable to grip.

As a final note, the Ruger GP100 is a full-sized service revolver and it will provide service for a very, very long time.