Shotguns are more than just “point-n-click’ interfaces. You know, “You don’t need to aim a shotgun. You just point it towards the bad guy and pull the trigger.” Sorry, some aiming has to be performed for the intended ammunition to strike the intended target.

While I have, and have seen shotguns equipped with red dot and reflex sights, they seem to be better suited to outdoor work and at longer ranges than one would find in an in-house environment.

Shotguns used at in-home distances are barely going to have any time for the shot column to separate from the shot cup or wadding before striking the target, and have much tighter patterns than most expect, even when using cylinder-bore shotguns. What this means is that without sighting in on the vitals, the bad guy may end up with superficial wounds instead of threat-stopping holes.

Very few treat their Home Defense (HD) shotgun, one that is primarily intended for indoor house clearing, with the same respect given to their home defense MSR or pistol. Folks like to exchange stock sights on their pistol for night sights. Folks like to add red-dot or reflex sight to their home defense MSR and may even purchase one with a laser. The HD shotgun, however, is usually not considered worthy of the same attention. After all, you only have to point it and shoot it, right?

My primary HD shotgun is a Mossberg 500 20-gauge “Tactical’ model. I decided, at some point, to add an optic, a red/green dot sight to be exact. The primary house load for this HD shotgun is #3 Buck backed up by 5/8-ounce Remington “slugger” ammunition. The shotgun had already been patterned at household shooting distances, so that was not a concern. At a time earlier, I had mounted a red laser, but later decided on an off-brand green laser. Unfortunately, and within 14 downrange loads of the “Slugger” ammunition, the green laser failed and I was back to square one. I was not through with lasers yet, however.

A The UTG-RG40CDQ red/green dot sight replaced a damaged green laser. A laser sight was still desired, however.

The UTG-RG40CDQ red/green dot sight replaced the green laser and it has proved worthy of being mounted on the “Baa-Baa”, the Mossy 500 Tactical 20-gauge. It has held up well and is zeroed at 25-yards. The one drawback; however, is that it requires me to look through the looking glass and place the red or green dot on the intended point of impact. I may or may not have time to shoulder the shotgun and obtain the necessary sight picture; I may just have to point and shoot the darn thing. With this thought in mind, I took a path back to the laser. 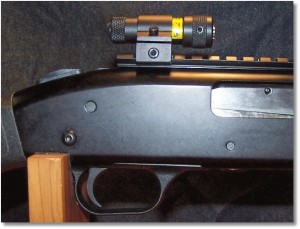 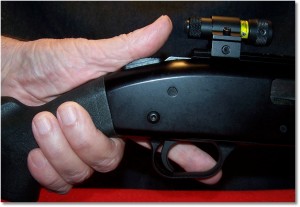 The top-mounted laser, and Mossberg top-mounted safety, allows for easy activation with the thumb

Since I had already mounted a Weaver rail on the ‘Mossy’ it is simply a matter of finding the right laser that would hold up to the recoil of a 20-gauge while shooting slugs. A low-mount is what I favor as I can look over the laser and gain a full field of scan. I also needed a laser that would be quickly accessed; turned on and shut off as need be. I once had a laser mounted with an external momentary switch, but I found it could interfere with operating the Mossberg’s top mounted safety switch; a device that is as important as the trigger. The external switch was canned and a push-button on/off rear cap switch was substituted. The laser was mounted on top of the Weaver mount to the almost rearward position on the rail. With this setup, I could activate the laser with my thumb and use that same thumb to operate the top-mounted safety. I ended up going back to the laser that I first mounted on the shotgun that is a unit made by Crossman (yeah, the same people that make air guns) as it is a solid unit, has not lost zero under numerous rounds of “Slugger” ammunition, and is a compact and lightweight addition. The one thing that I don’t need is a heavy and cumbersome shotgun. I consider the 20-gauge as the ‘carbine’ of the shotgun world and that means light and quick to handle.

I choose the top mounting position for a reason I think makes sense. Most of the recoil with the shotgun is up and back. With most firearms, there is a rotating point (a pivot point, if you will) where the firearm’s recoil forces the firearm to rotate down rather than straight back. The felt recoil, at this point, is actually less than at the muzzle or butt and is almost to the point of being neutral. This ‘rotating point’ is an excellent spot to mount a device that may succumb to felt recoil.
Whether my theory holds water is anybody’s guess. The reason the shot gun does not rotate when fired is because it is normally held in the shoulder pocket, much like a rifle, and the push-pull that we use to stabilize the firearm pretty much negates any roll of the long gun. What we have is muzzle lift and a straight back push. Under heavy recoil, like that of firing a slug, the shoulder rolls with the recoil to varying degrees, which may or may not contribute to muzzle lift. When firing light loads, like target and light varmint loads, recoil is actually pretty light and very little muzzle lift is experienced. When buckshot and slugs ammunition is fired; however, many folks find out just how recoil sensitive they are.

The beauty of the laser on a shotgun, like any other firearm, is that you can focus on the intended point of impact quickly and you can’t spend more time activating the laser than you are engaging the target.

Some will say that the laser track beam will give your position away. There may be something to that. However, there is also something to the effect that a laser has upon the eyes when it pointed on them. There is an immediate reaction to look away. Having a laser pointed at the eye also has an extreme disorienting effect. The laser also has a psychological affect, for both the pointer and the pointed at. Couple that effect with the audible sound of racking a shotgun and there might be some cause in the bad guy not continuing with his original plan. 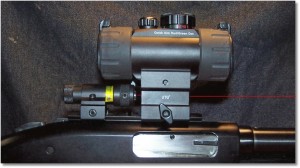 Looking Like An Experiment, the Laser Beam Points Through A high Mount That Holds a Red/Green Dot Sight. Both Are Set for a 25-Yard Zero 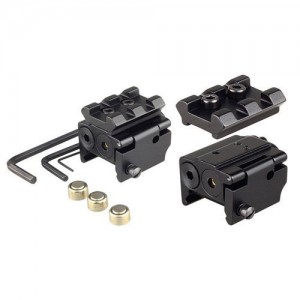 My particular laser is top mounted. I can operate it easily with the thumb of my shooting hand, it is in close proximity with the Mossberg top-mounted safety switch, and this configuration works for me. There are; however, different laser units that mounts on the barrel, ammunition tube, or even incorporated in ammunition tube end caps. I have seen light/laser combinations and also sight/laser, and also sight/light/laser combinations. The type of laser mounting is really up to you as is the decision to incorporate a laser as part of your HD shotgun platform.

Adding a laser sight to your shotgun is like adding a direct path that you want the projectile(s) to take on their way to the target. The laser negates the need for a cheek weld and good sight picture, which on a shotgun is wanting at best. Place the dot on the intended point-of-impact and follow it up with a most excellent trigger pull when the situation presents itself.