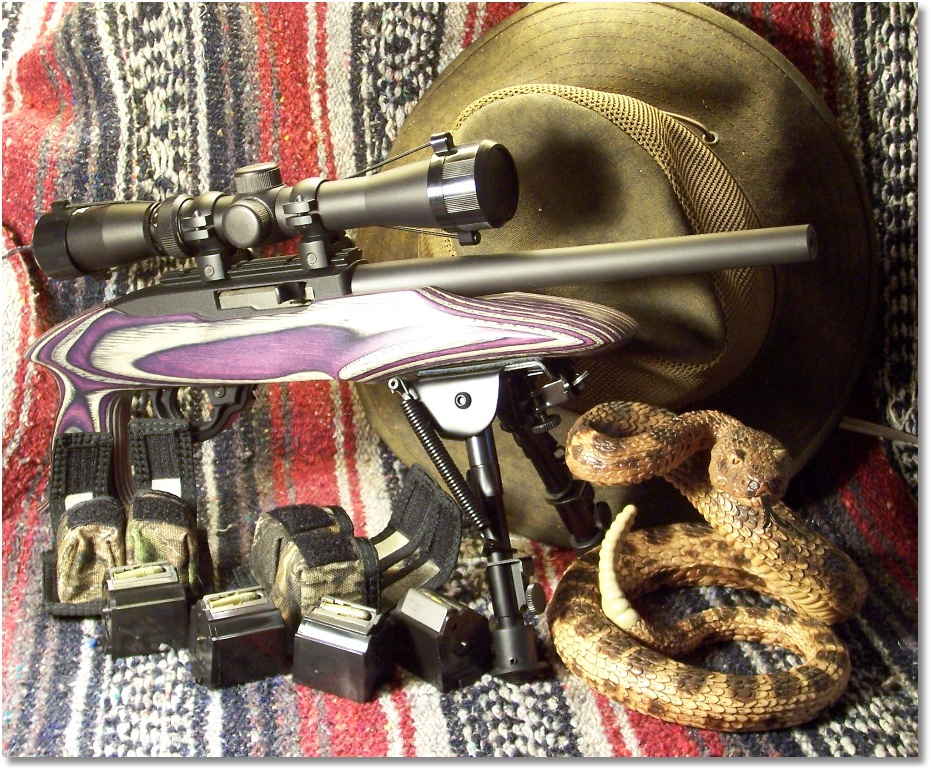 The Ruger 22 Charger – Don’t Dodge This One!

The Ruger 22 Charger has been in the Ruger menu for quite some time. I purchased one just to see what Ruger could do with a 10/22 action with a shortened barrel. The 22 Charger pistol, introduced in late 2007, is a handgun based on the 10/22 action. The 22 Charger comes with a laminated wood pistol stock with forend, a 10″ (254 mm) matte blued heavy barrel, a bipod, and a Weaver style scope base in lieu of iron sights. Overall length is just shy of 20″ (508 mm).

My particular Charger came with a black/purple laminated pistol grip stock that took me a little getting used to, but has grown on me, and I like it quite well now. 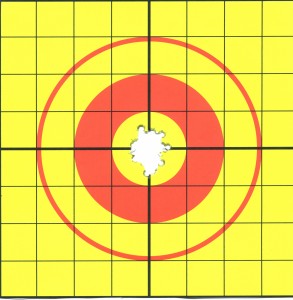 The Ruger Charger is Quite Accurate With Good Ammunition

The Charger does not come equipped with sights but does come with a already-mounted Weaver style scope base. Attaching a NcSTAR Pistolero Rifle Scope – 2-7×32 Pistol Scope was no problem at all, as Ruger provides all of the necessary base hardware to do so. Having a 10/22, and which the action for the Charger is based, I was not expecting a most excellent trigger – and I was not disappointed. Based on my previous encounters with the 10/22 trigger, it was time to change a few things. First up was to change out the stock trigger hammer with a Volquartsen Target Hammer with Bushings. Next up was changing the stock bolt release with a Volquartsen Automatic Bolt Release unit that allows me to pull back the bolt slightly to the rear to release the bolt, thus eliminating the need to push up and backward on the bolt lock mechanism to release the bolt. The next item replaced was the bolt stop pin and a polyurethane Volquartsen Recoil Buffer filled the need perfectly and stops damage caused by the bolt battering the recoil pin.

The last item changed out was the magazine release lever to a unit that would allow dropping the standard 10-round rotary magazine without changing my grip. I have one such unit on my 10/22 but since that is a rifle stock, as compared to the pistol grip of the Charger, I opted for the Tactical Solutions Performance Extended Magazine Release that allows me to push a lever, drop the magazine, and insert a fresh magazine without releasing the gun with my shooting hand.
For less than $100, I now had a 2.5-pound trigger pulling, easy bolt releasing, quieter-than-stock, and fast magazine changing very long pistol. This was to be just a good plinking pistol and the aforementioned items was a simple approach to making it just that.

The Ruger 22 Charger comes with a bipod that looks like a Harris unit (I do not know if it is but it closely resembles one) that easily attaches to the front sling swivel mount. The bipod extends from 8-inches to 12-inches. The spring-loaded legs of the bi-pod assure a rock steady platform to work with. Note that you can use the 25-round aftermarket magazines with the bi-pod attached. I prefer the standard 10-round rotary magazines to aftermarket units; however, simply because they have never failed me. The stock for the Charger is quite long and can be a handful to hold steady with the 3.5-pound weight of the gun without using the bi-pod. Most shooters of this gun, when shooting offhand, simply use the support hand to grab the stock’s forend to stabilize the gun.

The ergonomically designed grip of the pistol fits well in my hand. The laminated stock is moisture-resistant, which help to maintain zero in changing weather conditions.

The one feature that I would like to have is an automatic bolt lock that would hold the bolt open after the last round fires. There is an aftermarket fix for this but it requires a magazine modification provided by the manufacturer of the automatic bolt lock system, CST. You can send your stock 10-round rotary magazines to CST for modification – for a price, of course. To me, the show is not worth the price of admission and I resign myself to charging the bolt by hand. To others, it may be a worthwhile investment.

I had originally intended this gun for plinking and an all-around fun gun to have. The first sight that I mounted was a Truglo 1 x 30mm 5 MOA Red Dot Sight TG8030P and it was fine for up to 25-yards. My old eyes demanded more and a search for a decent pistol scope ensued.

Although one can spend many dollars on a quality scope, the NcSTAR Pistolero Rifle Scope – 2-7×32 Pistol Scope has turned out to be a perfect scope for this gun (Note that I mounted one on my Mosin Nagant as a scout scope and it has held up well to recoil and stays zeroed). I mounted the scope with a set of Weaver 1″ mounts. The scope has 8.7-to-10.7-inch eye relief and gives me a 14-to-4.5-foot field of view at 100 yards. The downside is the additional 11.6-ounces of scope weight added to the 3.5-pounds of gun weight. A good scope; however, allows me push the limits of the Charger and longer ranges than 25 yards.

For this range session, I set 25-yards as my initial zero. A 25-yard zero should get me within 1″ at 50-yards without holding over and about 1.5-inches low at 75-yards, theoretically. 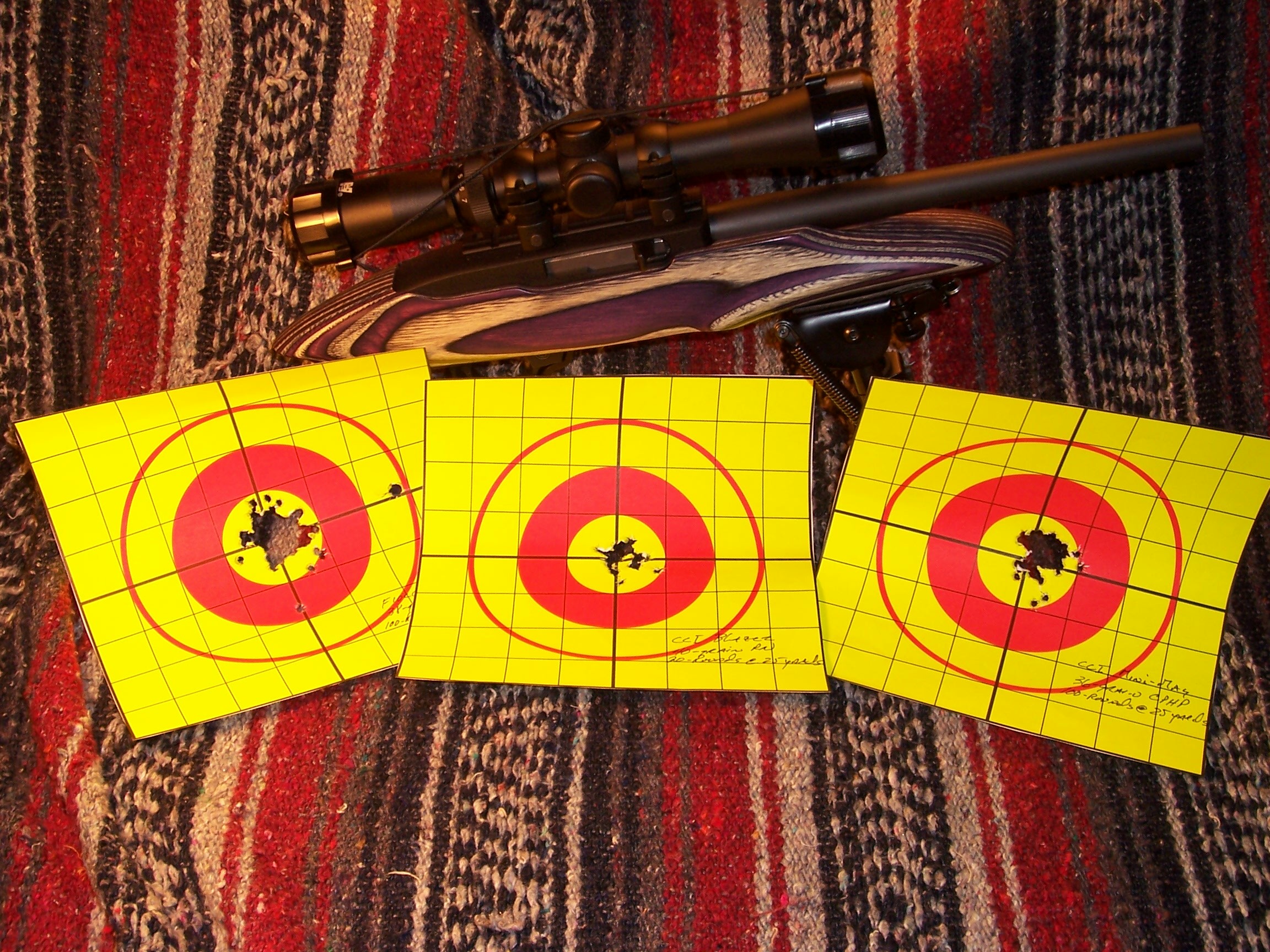 This was OTC ammo like most of us use and it would be a good indicator of how this pistol would do with run-of-the-mill ammunition. Match ammunition would undoubtedly give me better results.

(Left Target in picture) The Fiocchi 38-grain Plated Hollow Point ammunition turned in the worst group of the three types of ammunition fired. I attribute some of this to this ammunition being the first of the three fired and I was trying to get used to the new trigger job that developed a slight glitch; the trigger would not return fully. Apparently, the new trigger spring is slightly on the light side and I will have to fix that.

Notice that two things occurred: The round at the bottom was actually a light load and I could feel the difference in recoil and sound when it fired. It was probably a “squib” round; it was simply not loaded as hot as the other rounds that fired.

When I saw the hole at the right side of the target through the scope I thought, “Man, how did I pull that one?” When I pulled the target forward after I completed the tests, I noticed that it was a 9mm round and not a .22. The lane next to me was a husband, wife, and daughter trio was shooting a 9mm pistol. Somehow, one of their rounds killed my target, they were using a laser, and their targets were 10 feet in front of them and yet one of them managed to hit my target one lane over!

With the exception of the “squibb” round, The Fiocchi ammunition shot well out of the Charger with no FTFs or FTEs.

Overall, the Fiocchi ammunition gave me good results, but not up to my standard and, apparently, not of the gun’s either.

(Center target in picture) The CCI Blazer 40-grain RN gave me an excellent group with what I consider two fliers. Unfortunately, I only had 20 rounds of this ammunition so I could not really test it to its fullest.

Again, there were no failures with the ammunition.

Right target in picture) The CCI Mini-Mag and the CCI Blazer were pretty close to being equal. The results show 100 rounds of CCI Mini-Mag. The rounds were initially hitting slightly high and right of center and adjusted my POA to bring the shots down. I will be finalizing the zero at 50 yards some time next week and I was not too concerned about it for this session.

The Ruger 22 Charger has turned out to be a fun gun to shoot and I cannot wait to see what it will do at a greater distance than 25 yards. With the exception of a weak trigger spring, (I am just going to do some polishing, as the new trigger will eventually wear itself in) it functioned flawlessly.

Before the range session, I added a Pachmyr Tactical Grip Sleeve that I had laying around just to see if I would like it – and I do. The grip sleeve helps to position my hand at the same spot, it cushions the hand against the immense recoil that only a .22 long rifle round can generate, makes the grip slightly sticky, and I like finger-grooved grips.

The bi-pod, as provided by Ruger, really helps to stabilize the gun when shooting. With the weight of the firearm plus the scope, this gun really needs a stable platform. If you do not wish to use the bipod, you can hold the forearm like you would a rifle with your off hand.

Take note that due to technical features, (such as the magazine being outside the pistol grip (as in the TEC-9), the Ruger Charger is not legally available in all U.S. states.

Ruger has been producing the standard version of their 10/22 rifle since 1964 and that alone should tell you something. Ruger has taken that 10/22 platform and turned it into a pistol version with the Ruger 22 Charger.

Here are some pros and cons to consider: 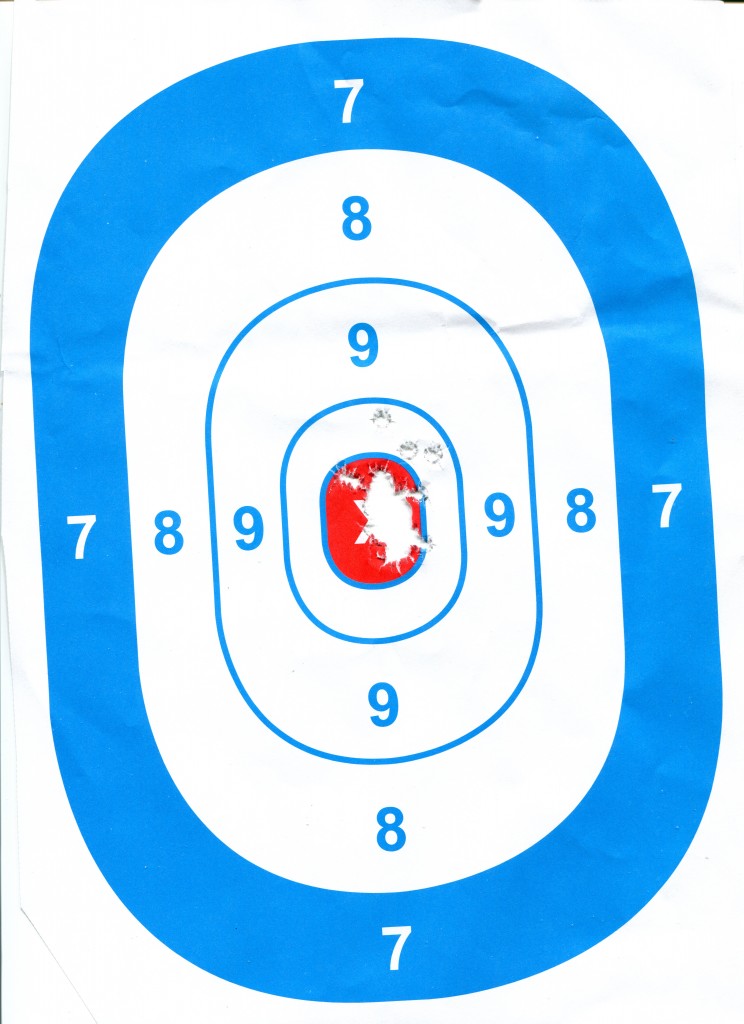 Range Results with New Ruger BX Trigger, BX25 Magazines, and Blazer 40-grain LR Ammunition. High Shots were the First Three and Then I Started Settling In

I finally got a chance to take the Ruger Charger to the range after installing the BX trigger and the results were outstanding (for me). This was also an opportunity for me to test the two Ruger BX25 magazines that I had purchased, and which had been stoked to the maximum for about 7 months (I know – I don’t get out much).

There were absolutely no failures with the magazines, the new trigger, or anything; it was really quite boring, but still worth mentioning. Distance was twenty-five yards and I was shooting an old box of Blazer 40-grain 22LR ammunition.

The first three shots out of the BX25 magazine landed a little high and I adjusted the scope magnification and my shooting position (bi-pod extended and my support hand stabilizing the butt of the grip). The resulting group took out the near center of the bull. I was satisfied; however, with the results and with the new Ruger BX trigger even with shooting Blazer ammunition. With better ammunition, and a better eye, I would hope to close that group up.

The new BX Trigger was a little gritty at first but is smoothing out really well. With a three-pound trigger break, this trigger is a world of difference over the standard Ruger 10/22 trigger.

Since I first wrote this article, Ruger has come out with two outstanding versions of the Ruger Charger that are well worth looking into; the standard and the take-down. Personally, I like my early version and don’t care for the grip that is currently being used on the new models. For me, I would need a grip sleeve or see if the Hogue over-molded grip, that fits all AR platforms, would fit the Charger (that by all appearances it would). The take-down version would be a handy handgun for BOB or GHB use.