Shoot For The Fun Of It! 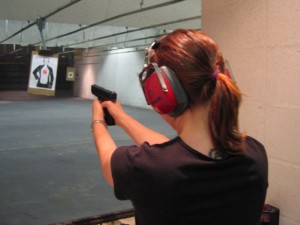 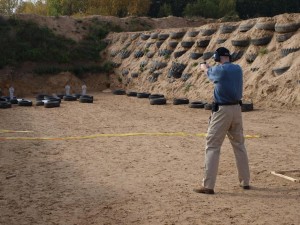 When we finally get enough time and ammunition we head to the range –usually for a purpose. Whether to sight in a scope on a rifle for hunting, break in a new firearm, run shooting drills, or practice with our favorite EDC, we have a purpose in doing so. It is usually serious business in how we shoot. For hunting purposes, we want to bring meat to the table instead of buying who-knows-what off the grocery shelf. When we break in a new firearm we want to be ensured that it will function flawlessly when we need it. When we practice with our favorite EDC, we need the confidence that the firearm will serve the purpose of defending ourselves, family, and castle. 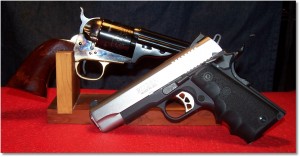 My EDC is a modern semi-automatic pistol that I have to totally rely on should the need arise to do so. Normally, I use a target that depicts the human form to shoot at with my EDC; I need to know that I can shoot at and hit parts of the human body when I need to. I don’t shoot for tallying points, but I do shoot for stopping a threat should one present itself to me. The distance of the target usually varies from seven yards to twenty-five yards during the course of a practice session.

I may, during a range session with my EDC, shoot the firearm one-handed strong side, two-handed in a modified Weaver stance, and one handed weak side. Two-handed modified Weaver is the most common of the three that I practice.

With the single-action revolver, I only shoot one-handed and most often from the strong side and a “bladed” stance. No scopes, no red dot, and no lasers; just me and what sights the SA revolver affords me. Since the West has already been won, there is no need for fast draws; just a closed eye, an extended arm, and a steady hold on the firearm. No matter that the SA revolver is of modern design, I load one, skip one, load four, and rest the hammer on an unloaded chamber. Sometimes, I shoot older style SA revolvers that require this loading (no hammer block safeties), I need to follow the rules, and not deviate from them.

There is some satisfaction in pulling the hammer on a SA revolver to the full-cocked position, whether there are four clicks or two when doing so. There is some sense of satisfaction when I pull an extremely light trigger and send a round downrange regardless of the caliber of ammunition being fired. I also select calibers that are pleasurable to shoot; .22 LR, .38 special/.357 magnum, .45 LC, and .44 special/.44 magnum. While I have fired a .500 Linebaugh in a SA revolver, I do not find it pleasurable to shoot; therefore, I don’t anymore. A 240-grain, .44 magnum round is about my upper end of giggles and tee-hees to shoot out of a Ruger Super Blackhawk.

On a side note, I think that younger shooters don’t appreciate the SA revolver. They may not have been around when “Cowboy” and “Western” movies and television series were the hay of the day, and when the seemingly endless capacity of the SA revolver reigned king and were drawn from “Hollywood” holsters by the likes of Wyatt Earp, Bat Masterson, and The Lone Ranger (among others). While we all appreciate the modern marvels of pistol persuasion, young folks just don’t appreciate the history made through innovation of handgun visionaries and gun smiths of the past that got us to this point. To them I say sometimes you have to go back in time to appreciate what you now have.

Although I prefer the SA revolver for pleasure, it is not everyone’s favorite piece. The SA revolver only carries a full capacity of six rounds of ammunition, it is slow to load and unload, sights are sometimes wanting, and it forces one into using good marksmanship skills. Modern folks don’t have time for that; we need the instant gratification that only high-capacity, semi-automatic pistol magazines can provide – or so it seems at times. Poor quality shooting is camouflaged by more quantity of shots taken.

If shooting a single-action revolver is not be your cup ‘o tea, that is fine with me. If you enjoy shooting a Ruger 10/22 for fun by all means do it. If your EDC pleases you to shoot, and if you can also have fun with it, why not do so? 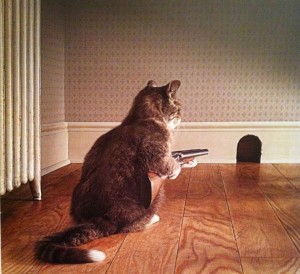 The bottom line is that we need to take some time out from the stress of our personal training with self-defense firearms and insert some time for shooting them simply for the pleasure of doing so. Hang some “fun” targets and remove some of the stress in your life. Aim small, miss small, and enjoy yourself while doing so.