Holster Cant – What You Can and Can’t Do About It

Is one cant better than the other? The short answer is: that depends. As with most things in life, everything is a trade-off and nothing is a one size fits all. At the end of the day it really comes down to personal preferences. Each offers slightly different advantages over the other. I can shoot and carry a 15 degree (or more) forward cant holster, and, I don’t find the forward cant grip not natural or uncomfortable, but I can see how others might.

Is there any truth to one being faster than the other? I really don’t know. I’m certainly not fast on the draw in the first place, but I’ve never honestly felt that a forward cant holster added any speed to my already slow draw. However, you may feel differently. I do; however, feel that a forward cant is better for concealment in an IWB holster. 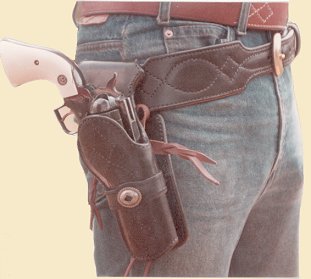 I remember watching fast draw competitions when I was a kid. The majority of fast draw holsters were “snap through, rear cant” holsters. The competitor simply “snapped’ the barrel of the handgun through the front-break of the holster, and since the barrel of the gun was already pointed at the target, less effort was made to bring the gun on target. Some of these competitors were blazingly fast. The holsters; however, were not conducive to everyday carry. 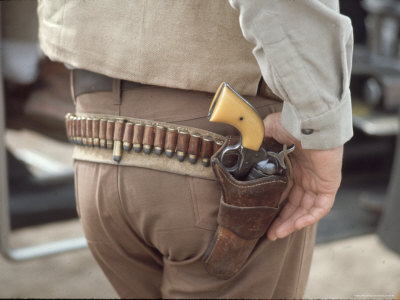 Switch to western movies; the Hollywood depiction of the old west. Two gun rigs hung low on the hips. Ideally (as I was taught from the movie “Shane”), the butt of the gun should be between the hand and the elbow. With my double-holstered rig and my cap guns, I tried out-drawing many a western actor while watching them on the tube – I was never successful (but it sure was fun trying to outdraw the “Cisco Kid”, Sheriff Matt Dillon, and others). Even “The Duke” was laughable in his early career with some of the rigs Hollywood made him wear. Later; however, “The Duke” came into his own stride and could carry a Colt Peacemaker like he was born with it.

As concealed carriers, we are not only concerned with concealment but with quick access to our best friend when carrying it. Of course, there are varying degrees of concealment and “deep” concealment is important when nobody needs to know that you are carrying a firearm but you. That usually means an “inside the waistband” holster of some type and I have seen great strides to perfect this holster over the years by many manufacturers and custom holster makers.

I once read a guideline about holster cant that really made sense to me, “As the holster’s position is rotated around the waist, the cant of the holster must change accordingly. For appendix carry, the holster cant should be negative, move to neutral when the holster is in-line with the hip, and then moves forward as the holster moves behind the hip.” I believe that the “FBI” cant (15-degrees positive) might have evolved from this principle. 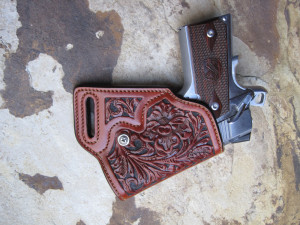 Small of the Back Holster. Note Extreme Forward Cant 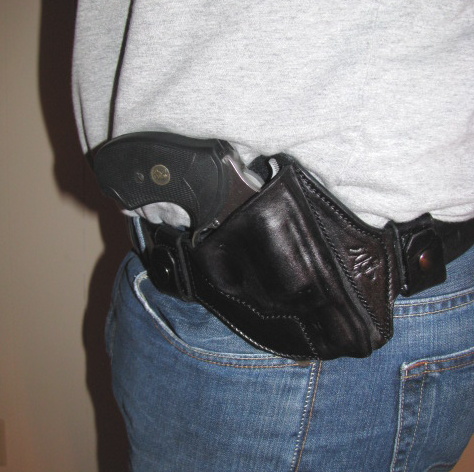 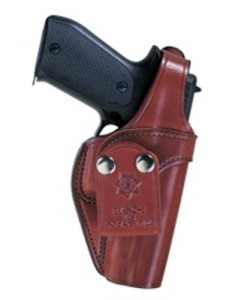 If you look at a “cross draw” holster, a negative cant also holds true since one would be drawing the firearm from the weak side, gun butt forward position; It is difficult to draw from a neutral cant, and almost impossible to draw from a forward cant holster from a cross-draw. A negative cant, to varying degrees, makes the cross-draw easier.

Straight Cant:
Early holsters were only offered this way. The holster rides straight up and down on the belt. The draw is a simple up and then out motion.

Proponents of this cant make the following points:

The holster is canted forward at an angle (normally, 15-degrees – the FBI cant).

Proponents of this cant make the following points: 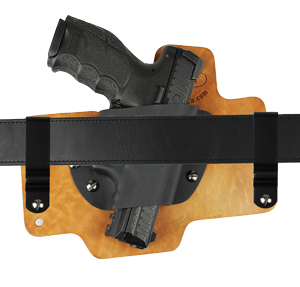 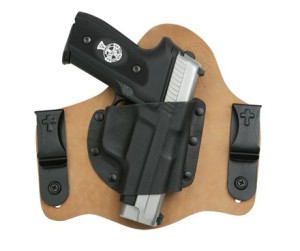 I think that the advent of the “hybrid” IWB holster really opened up the door for gun toting folks to customize the cant and ride of the IWB concealment holster to fit his or her particular needs. Holsters like the “Crossbeed Super Tuck” allow the user to adjust both ride height and cant of the holster. There are other holsters; however, that allow the user to adjust the cant using a captive swivel adjustment system (such as the Bianchi 3S). Custom holster makers may even makes holsters to your cant specifications, but most default to the 15-degree FBI cant in their products.

I have been experimenting with my SHTF Gear holster for the XDs lately. I prefer the holster to be as low as I can wear it, as I have somewhat of a long wingspread and too high of a holster makes for a tight and difficult grab of the gun butt. I prefer the top of the holster be as much in line with the top of my trousers as possible while allowing no interference from the trouser when holstering the firearm. I also like the majority of my holster to be below the waistline to add stability to the carry (if you have ever worn a high-ride IWB holster with a short-barreled revolver, you realize that there is a “tipping point” of the holster; the point where the holster tips outward and way from the body, which forces the butt of the gun to also go outward from the body). When I carry my Ruger SP101 2” version, it rides in a Crossbreed Super Tuck. There is enough “depth” of the holster inside the pants to keep the SP101 stable.

The cant of the holster needs to be such that I can conceal, as much as possible, the gun butt. With the XDs and a standard 5-round magazine, there is not a lot of grip or protrusion from the magazine. Swap that magazine with the 7-round version and the need to conceal a longer gun butt increases (especially when I bend over from the waist) to avoid printing as much as possible. Essentially, with the longer magazine in place, I have the equivalent of concealing a “Commander” sized 1911.

What seems to work (for me) is a cant somewhere around 20-degrees or so when wearing the holster just behind my right hip (3:15 position, perhaps?). With this degree of cant, the rear sights are tucked low against my side and low to my waistband, I can protect the XDs from accidental bumps while in a crowd, and the draw angle (for me) is not extreme. This positions the pistol on the body so that it doesn’t poke into me at uncomfortable “pressure points.” It keeps the grip tucked into the torso, so that it can’t flag out over top of the belt, printing through my shirt – even with a seven round magazine in place.

For IWB, a hybrid holster is hard to beat. The Kydex scabbard married with a leather backing is very popular and probably the most stable holster on the market. The Crossbreed, White Hat Holsters, Alien Gear holsters, SHTF Gear, and even the Galco King Tuk can normally be made or found in a size and configuration for your carry.

Advantages to the hybrid IWB holster are;

SUMMARY:
The cant of a holster meant for IWB or OWB carry is an important factor that should not be taken lightly when choosing a holster that serves as a home for your defensive tool for most of its carry life.

Cant affects the ergonomics of the carry and of the draw of the firearm. Too little cant (or neutral) may be adequate for a fast draw but may hinder concealment. Too much cant may aid in concealment but affect the speed of the draw. A balance of holster ride height and cant must be taken into consideration along with holster material and other factors. 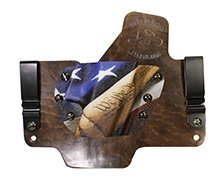 A hybrid IWB holster generally offers the best solution for adjusting ride height and cant to your liking; it provides the freedom of choice that you can make rather than be locked into a manufacturer’s idea of how the holster is to fit you.

For IWB, I prefer the hybrid holster because of its versatility and adjustment features. For OWB, I prefer the pancake style with thumb break and the 15 degree “FBI” cant for strong-side carry for both revolver and pistol.

I hope all of this was informative. What I can’t help you with is your particular holster cant – you pretty much have to work that out for yourself. As in the opening statement of this article, at the end of the day it really comes down to personal preferences. Each cant option offers slightly different advantages over the other.