The Single-Action Revolver for Self-Defense 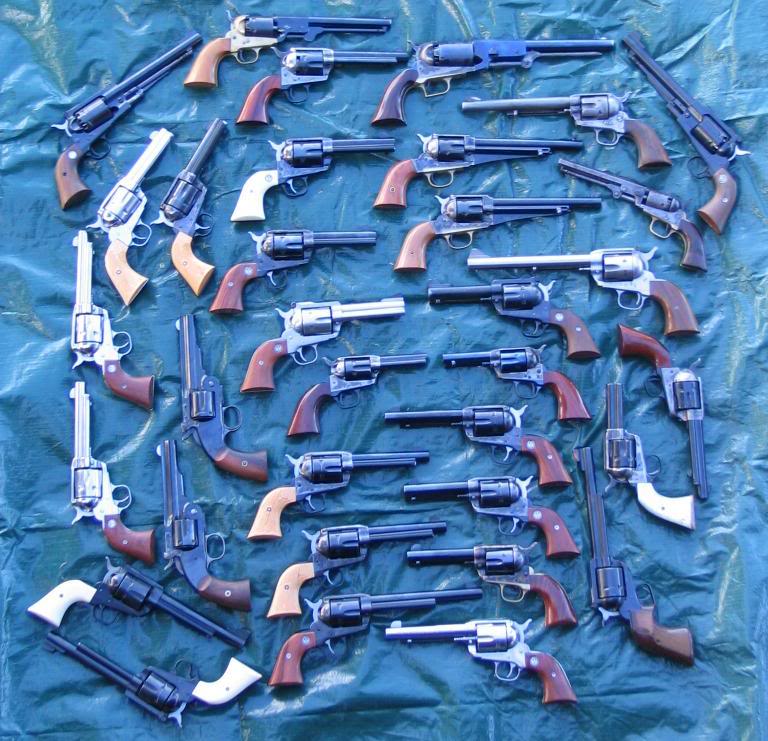 Stepping into the firing booth, I reached low inside my vest; pulled the 4.62″ barreled .357 Ruger Blackhawk from its cross-draw holster, reached into vest pocket, and retrieved the 125 grain, .357 magnum rounds that resided there. With a slightly unpracticed hand, the Ruger was loaded and I commenced to christen a newly posted target.

Sliding it back into the holster, I reached across with my left hand, pulled the 6.5″ .357 Blackhawk from its Hunter’s 1090 holster, loaded it, and fired six more rounds left-handed with close to equal accuracy, and returned it to its rightful place. (I believe a Western ‘pistolero’ would call this a “Texas Reload”).

The Ruger SA revolvers just melted into my hand; they always have. Something about firing an old Colt SA or a Ruger SA revolver just appeals to me. I guess that it goes along with my love of lever-action rifles and double-barreled, short-barreled shotguns. When I look down the barrel of a single-action revolver, seeing the extraction tube sitting next to that barrel, it reminds me of driving an old car that has fenders – real fenders and a hood ornament mounted way out on the radiator. The view looking down that long hood always gave me a sense of pleasure – Like looking down the 7 1/2″ barrel of a single-action handgun in .45 Colt. I digress, however.

I shot a couple more of cylinder-full rounds, cleared the weapon, and returned it to its resting place. Looking at the target, it really got me to thinking about using a single-action revolver, in today’s times, for self-defense. I still consider it a viable weapon even with all the semi-autos and double-action revolvers that are out there today.

Some might call me a Reformed Luddite; I accept technology and its benefits and necessity in our modern age. As a Reformed Luddite; however, I attempt to limit the de-humanization of technology in day-to-day interactions with other people. I do not own a cell phone, an I-pad, Droid or Kindle. I use a computer for my writing but only for the fact that I can change my words more easily than with a typewriter, check grammar, and correct spelling airors errors. I do own high-capacity semi-automatic pistols and even a couple of semi-automatic rifles. While I enjoy the benefits of such, my first love is with the single-action revolver, lever action rifles and short, double-barreled shotguns.

For the early part of the 1800s, firearms were muzzle loading rifles, shotguns, and pistols. The percussion cap was still replacing the flintlock. Non-existent was a rotating-cylinder handgun. By the late 1800s, cartridge firearms had replaced muzzle-loaders, and rifles might be bolt action, pump, lever action, or semi-auto (Mexico had a semi auto military rifle in the 1890s). Handguns were usually revolvers or derringers, but some early auto loading pistols were on the market. The double- barreled shotgun was still king, but was starting to be replaced by pump or lever action shotguns.

Firearms of the 1800s would cost anywhere from 1-100 USD or more (12-1200 USD in today’s money). Considered as a lot of money at the time, firearms were well cared for as they may mean the difference when protecting life, limb, and property.

From 1836 until the advent of the 1911 Government Model, which was simply the packing of the .45 caliber projectile into a modern self-cocking pistol, the single-action was king. The Colt Single Action Army (also known as the Model P, Peacemaker, M1873, Single Action Army, SAA, and Colt 45) is a single action revolver with a revolving cylinder holding six metallic cartridges. Designed for the U.S. Government service revolver trials of 1872 by Colt’s Patent Firearms Manufacturing Company (today Colt’s Manufacturing Company) it became the standard military service revolver until 1892. Meanwhile, Colt introduced the double-action revolver in 1877 with the .38 Lightning and the .41 Thunderer. Both Billy the Kid and Doc Holliday took up purchase of the newfangled six-guns, but most six-gunners stayed with their single-actions. After all, they worked just fine, thank you.

With that said, allow me to express my thoughts, as well as others, about the single-action six-gun for self-defense.

With training, no handgun is any faster for the first shot from leather than a single-action. As single-action shooters claim, “We are talking an aimed shot, not just clearing leather and blasting away.”

Chuck Hawks puts it this way; “The single action (SA) revolver must be manually cocked before the trigger will fire the weapon. These are the traditional ‘western’ style guns, such as the Colt Single Action Army and Ruger Blackhawk and Vaquero models. Such guns are slow to reload, but powerful, accurate and deadly when the whistle blows. Their ‘plow handle’ grip shape fits most hands exceedingly well, making accurate fire comparatively easy. They can be fired rapidly from a two handed hold by cocking the piece with the thumb of the off hand.”

Somewhat like auto-loading pistols, I regard SA revolvers as an entirely satisfactory choice for home defense, particularly for experienced shooters. Single-action “wheel-guns” are not; however, the very best self-defense choice of weapons for the casual user.

Note: Load only 5 rounds on OLD single actions. More modern revolvers have safety features like transfer bar safeties and hammer block safeties etc ( such as the Ruger Blackhawk SA ) to prevent such unintended discharges. We have come a long way in safety on revolvers to get away from the “accidental discharges” due to hammer strikes. That being said , I wouldn’t have the hammer resting on a live round, in a revolver, unless it was a modern example with one of the safety features mentioned or similar.

THUMBING THE ACTION:
Most handlers of the single-action revolver are used to pulling the hammer back with the thumb of the shooting hand, as was done down through the ages. The natural-plowing effect of the revolver under recoil positions the hammer almost perfectly for shooting in this style. When shooting double-handed, when using the thumb of the support hand to re-cock the revolver, and with practice, firing five or six shots of your favorite ammunition downrange in a hurry is easy. In fact, when using the thumb of the support hand, and with practice, rounds fired downrange as fast as the 1911 semi-automatic pistol is possible. I cannot say that I have been able to do this, as my left thumb is older and slower than my right thumb, but I can hold my own in using this method.

“Fanning” of the single-action revolver is not recommended as it places stress on the gun and wears internal parts must faster than simply cocking the revolver for each shot. That said, I know of shooters who’s revolver’s innards have worn to the point that the hammer will not remain in the cocked position; the shooter simply aims, pulls back the hammer, and releases it to fire the weapon.

In Ruger’s rendering of common single-action pistols, there is no need to carry only five-chambered rounds like in the old days, as Ruger’s patented transfer bar safety allows you to safely carry six rounds.

Is the single-action revolver a viable tool for self-defense? With self-defense being a broad term, that includes defense against; two-legged “varmints”, four-legged furry beasts, slithering snakes, crawling reptiles, and your neighbor’s pet Komono Dragon, I would say ‘yes’ given the correct circumstances, proper caliber, adequate amounts of ammunition, proper training, and lots of practice.

Chambered for everything from .22 to the Pfeifer-Zeliska .600 Nitro Express Magnum, single-action “wheel” guns can handle just about anything that comes down the pike.

I love this particular brand of medicines! Viagra alternative new drugs. The National Association of Boards of Pharmacy® (NABP®) inspects Internet pharmacies and awards a “VIPPS” seal to those that meet its criteria.

4 Responses to The Single-Action Revolver for Self-Defense