Carrying Spare Ammunition on the Strong Side

An Example of Weak-Side Ammunition Carry

I sometimes go against convention. One of those times involve going against the thinking of “experts” that claim spare ammunition should only be carried on the weak side. For most right-handed shooters, that would be behind the left hip. This would be sound advice on the surface; however, I tend to dispute this advice by carrying spare ammunition for my EDC on my strong side in the appendix position. There is a method to this madness.

When I first started a legally concealed firearm, I did not really pay attention to where I carried spare ammunition – if I carried any at all. Back then, I was under the incorrect impression that merely brandishing a firearm would make the bad guy freeze or run in terror. Sometimes that was actually the case. I was folly in my thinking, but what did I know.

The military had taught me to carry spare ammunition wherever I could stuff the stuff and kindly provided a few magazine pouches to do so. Since my primary weapon was a long gun, it was not important to worry about what you stuffed spare magazines in – it was to how fast you could access the spare magazines.

Time moved forward and so did I. At one point, I became an armed security guard and, consequently, a law-enforcement officer. Both, of which, began some critical thinking within me about how much spare ammunition needed to be carried and where to carry it. It was not until I began competing with a handgun that I realized what worked for me in regards to where I carried spare ammunition.

The department for which I worked allowed us to carry anything short of a .44 magnum. The limitation existing only because 99% of our work was in suburban environments and the liability attached to sending a 240-grain projectile downrange at 1500 feet per second negated its use. My choice of carry was a Colt Series 80 Government Model while on duty and a Combat Commander while off-duty. Two magazines stoked with 230-grain JHP ammunition resided in secure magazine pouches on my offside while two more magazines resided in secure pouches at the middle of my back. I quickly realized that the magazines located at the middle of my back were extremely difficult to reach and they were moved to my left side just behind the flashlight and PR-24 holders on my duty belt. I was just getting comfortable with this arrangement when the department decided to issue the Smith & Wesson 686 revolver; my beloved 1911 was removed from on-duty service, although the Combat Commander stayed with me for off-duty service. It was the S&W 686 that led to my enlightenment about carrying spare ammunition. I now carried two speed loaders of 125-grain JHP ammunition on my offside in the appendix position and two in strong side carry pouches in the appendix position. 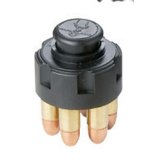 I joined the department shooting team and soon learned the trials and tribulations of shooting competitively. My first match resulted in a 3rd place finish, even though I had dropped one of my speed loaders. I was hooked and began loading my own .38 special wad cutters for competition purposes. I had to practice reloading the revolver a lot; wad cutter ammunition is not the easiest to load using a speed loader under any circumstances. I loaded rounds with no primers or powder for practice and spend quite a bit of time repeating the steps to reload the revolver. The one thing that I noticed while doing so was that I was a lot slower loading from the weak-side with my right hand. Although we had to wear “duty gear”, we could leave the security flap on the speed loader cases unsnapped to accommodate easy access to the speed loader. I soon learned, from a shooting mate, that I could also fold the security flap backward and tuck it in between the speed loader carrier and my trousers, which provided better access to the speed loader. Unfortunately, this method did nothing to secure the speed loaders under movement and, after an embarrassing moment or two retrieving errant speed-loader from the floor, I returned to the flap being unsnapped but still covering the speed loader. But, I digress.

Another few rounds of competition forced me to rethink carrying speed loaders on my weak side. I moved the four speed loader pouches to my strong side, as there was no restriction on where spare ammunition could be carried. Although repositioning did not improve my shooting, it did help my reloading as fast as possible. 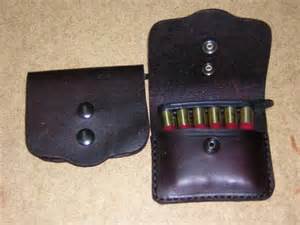 A Strip Pouch is Handy for Carrying Speed Strips

Reloading was not restricted just speed loaders; the use of speed strips and the loading of individual rounds was accepted. The courses of fire involved sending 50-rounds of ammunition downrange. We could only use duty gear and what was carried on that duty gear on any day. It was up to the officer/competitor to figure out how ammunition that was not in the revolver or in speed loader cases was to be put into play. For me, that meant; 6-rounds in the revolver, 24-rounds in speed loaders and 30-rounds that were divided into 5 speed strips. What rounds were not carried on the belt or in the revolver had to go somewhere and, for me, that was my right, rear trousers pocket. 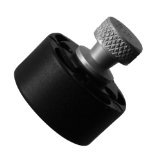 I long since left the department, moved into the private investigations and executive protection areas for a short time and finally, and then left it all behind. Still, the right side spare ammunition carry stayed with me throughout and remains with me today.

Fortunately, I don’t have to worry about competing any more, but because of the courses of fire used in the early competitions and the right side methods that I used for reloading revolvers has carried over into my civilian pistol carrying, I feel that I am well-versed enough to pass on this information to you and let you decide if strong-side appendix carry of spare ammunition will work for you.

Speed-loading the Revolver:
The procedure for reloading a revolver with a speed loader is close to the same for left-handed and right-handed shooters, with minor differences:

There are two methods of using barrel-type speedloader with each method being specific to the type of speedloader being used; twist or push-to-release.

In either method, once the rounds are released into the chambers of the cylinder, the speedloader is then discarded.

All of this is done, of course, while keeping trying to keep your eye on the target or the surrounding area and not the reloading process.

There is also a method of using speedloaders left-handed, but I have found it to be unyielding in its complexity. 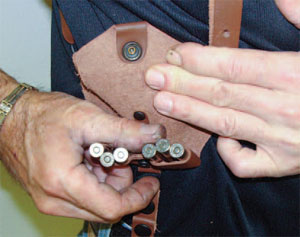 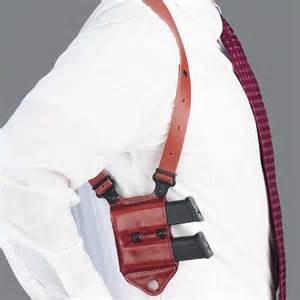 Now, let’s move to the semi-automatic pistol, which is what you probably have been waiting for in the first place and persevered through my previous prose like the trooper that you are.

Regardless if you are a left-handed or right-handed semi-automatic pistol operator, reloading is always done with the support hand. By positioning your magazine on your strong side, it is a simple matter of dropping your support hand virtually straight down to your spare magazine(s) and retrieving one while the shooting hand is releasing the spent (or partially-loaded) magazine from the pistol. (Note: The magazines are oriented in the carriers so that when I retrieve them, they are oriented for direct insertion into a magazine well. For my carry, this means that the bullets face my right side). If you time it right, by the time the old used magazine is dropping from the pistol you are already on your way to inserting a freshly-loaded magazine. The pistol is then quickly brought back into action either by shooting one-handed or supported. If the pistol has been emptied, you simply release the slide to chamber a fresh round. If there is still one in the chamber, simply keep shooting. There! That was easy. It was made even easier by keeping your fresh magazines as close to the support hand as possible. If your magazines are carried on your offside, the distance that the support hand has to travel is increased as is the time spent retrieving those magazines so crucial to your survival.

Tactics and Beyond Redemption:
You may notice that I have not mentioned any tactics in this write-up. Tactics are beyond the scope of the information that I wanted to impart. If at all possible; however, reloading should be performed while you are behind cover or on-the move, as necessary.

There are also advanced skills like reloading a revolver or pistol one handed that need to be considered. Not saying that you might get shot, but you could be. Learning how to reload a revolver or pistol while the firearm is being held by your knees, belt, armpit, etc., might be good skills to develop. I can’t cover all situations, but I can provide you with considerations to ponder. 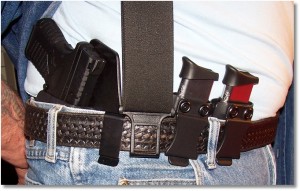 The XDs 45 and Strong Side Ammunition Carry 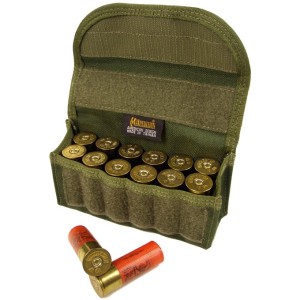 For long Guns, I carry spare ammunition on my “Long Gun” Side. In My Case, it is the Left Side.

Some may criticize my thinking on the matter of where to carry spare ammunition. That’s fine with me. What is important is what works for you, and that may not agree with what experts expound.